These beautiful little boiled dumplings (also known as tiny varenyky and ooshka) are filled with tasty mushrooms and dill.  The first recipe I’m adding that doesn’t use the Instant Pot! Boiling isn’t recommended in there.  But, we’ll save time by using pre-made dumpling wrappers.

These boiled Vushka (вуха) are meant to look like pigs’ ears.  They are served inside a bowl of borscht and make the Christmas Eve dinner of Sviata Vecheria special.

Jump straight to the recipe

I was surprised one day to find that “Russian soup” was on the menu in a Hong Kong-style cafe.  When I ordered it, a tomato-based soup arrived.  It’s a soup that originated with Russian immigrants to Hong Kong.  Here’s a great recipe for this style of soup that uses the Instant Pot.

Why am I tell you about Hong Kong? 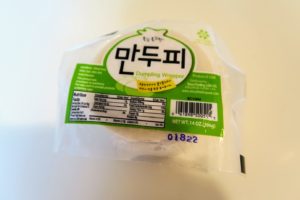 Hong Kong makes amazing dim sum dumplings.  My recipe for Ukrainian vushka for borscht uses Asian dumpling wrappers to save time. I live in an amazing place where I can use these different products to make Ukrainian food – check out how I made cabbage rolls with sushi rice.

In a traditional recipe, you would make a varenyky – perogy (perohe) dough from scratch, roll it out super thin, cut it into squares and hope the dough was strong enough to hold the filling while they boiled.  These dumpling wrappers save you that time and are mechanically perfect.  The ones I used happen to be Korean but there are many similar wrappers.

Instead of the mushroom filling, I also found one with herring or white fish, onions and breadcrumbs.  In one of my cookbook’s description of Sviata Vecheria, it says vushka are only eaten at Christmas.  You don’t need to only eat these at Christmas – they’re delicious any time.  You can even serve them in Russian soup from Hong Kong.

Start out with 2/3 cup cooked onions (from Instant Onions) or saute a finely chopped onion in oil for about half an hour on low heat.  If you’re making these dumplings for Sviata Vecheria, use vegetable oil instead of butter.

Chop some mushrooms – I used a 454 g package of cremini mushrooms. 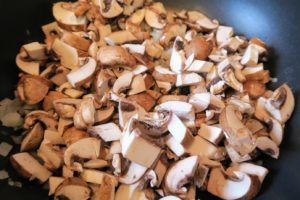 My grandparents used to gather morel mushrooms around their farm.  If you don’t have a bucket of morels around, cremini or brown mushrooms that are stemmed are fine.

Saute the mushrooms with the cooked onions for about 30 minutes – until the water appears and evaporates.  Remove from the heat and cool. 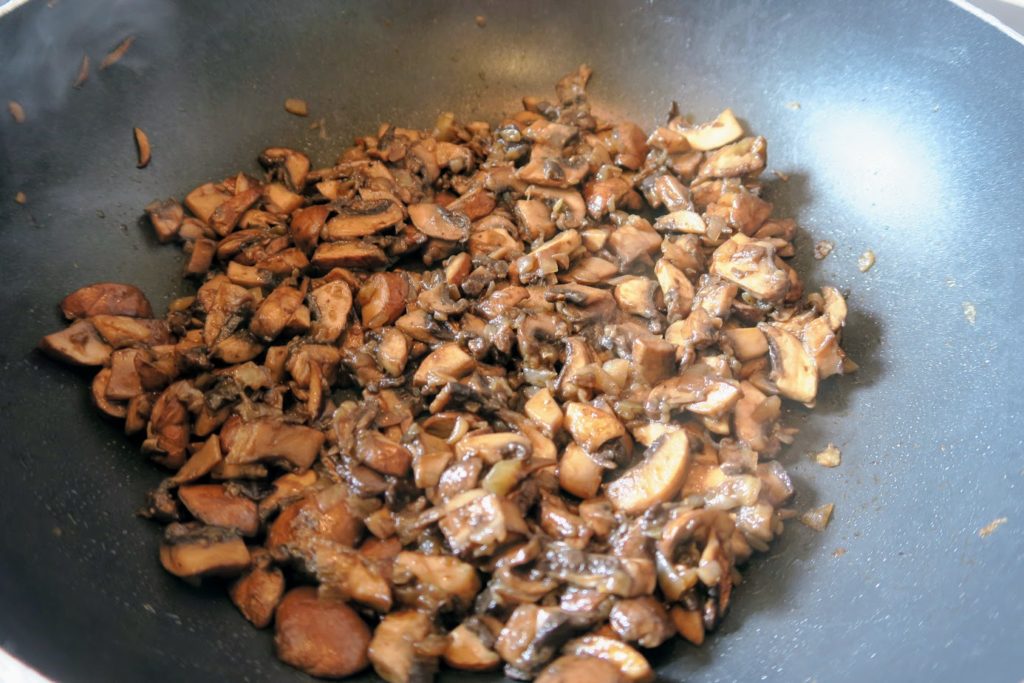 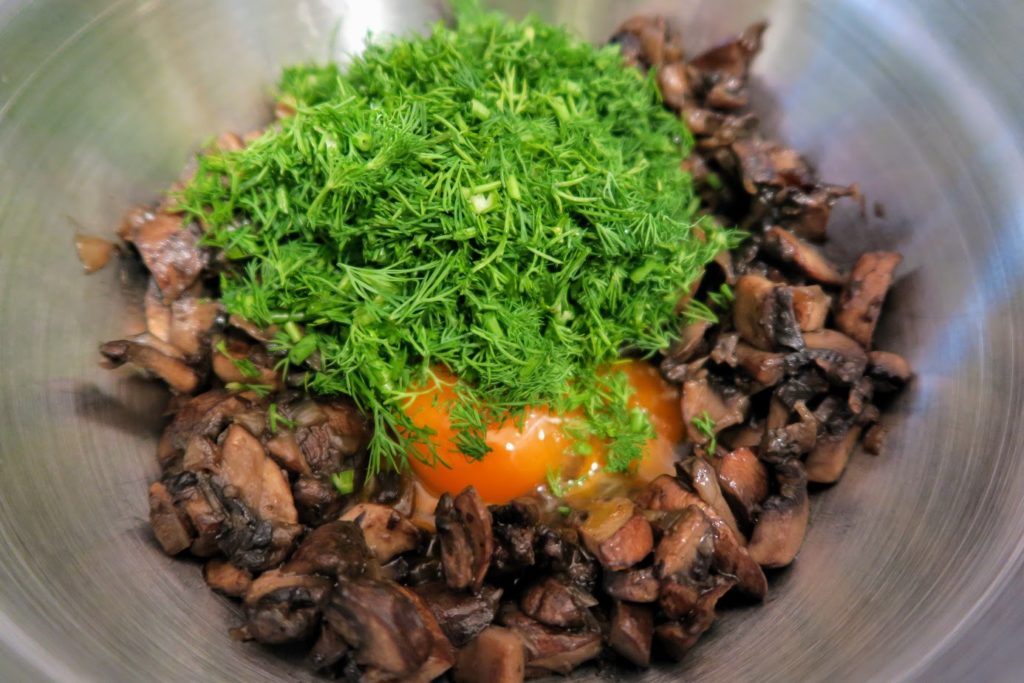 Add two egg yolks to the cooled mushroom mixture along with the chopped dill. Mix this until combined. 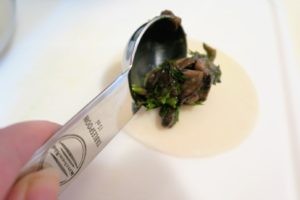 Then, take out one dumpling wrapper and place it on your counter or cutting board.

Top it with a little less than a tablespoon of the filling mixture. 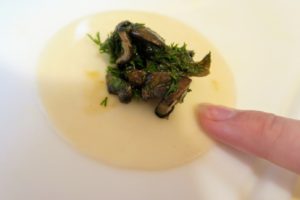 Dip your finger in the water and run it around the outside of the circle. Make sure there are no stray bits of filling where you’ll need to seal up the dumpling. I do this four times to make sure it’s wet. 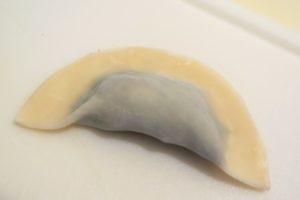 Fold the circle in half to form a semi-circle like a pierogy.

Press the two sides together.

All the way around.

Squeeze out any air while sealing.

Press again all the way around.

Gently fold the dumpling in half so the two corners touch.

Moisten the two corners and press together.  Hard.

Now, it looks like a pig’s ear or a tortellini. 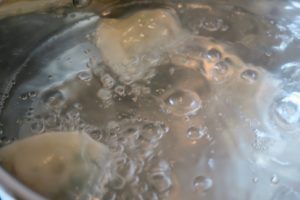 If you’re nervous about them staying together, boil a couple as a test.  If they explode, you’re probably not sealing well enough – use more water when sealing.  Press hard!  If they don’t explode, enjoy a quick snack.

As you complete them, line them up on a cookie sheet.  If you live on the Prairies (and it’s -20°C outside), you can put them outside to freeze.  Everywhere else, just put them in your freezer.  Once they’re frozen, you can bag them without them sticking together. 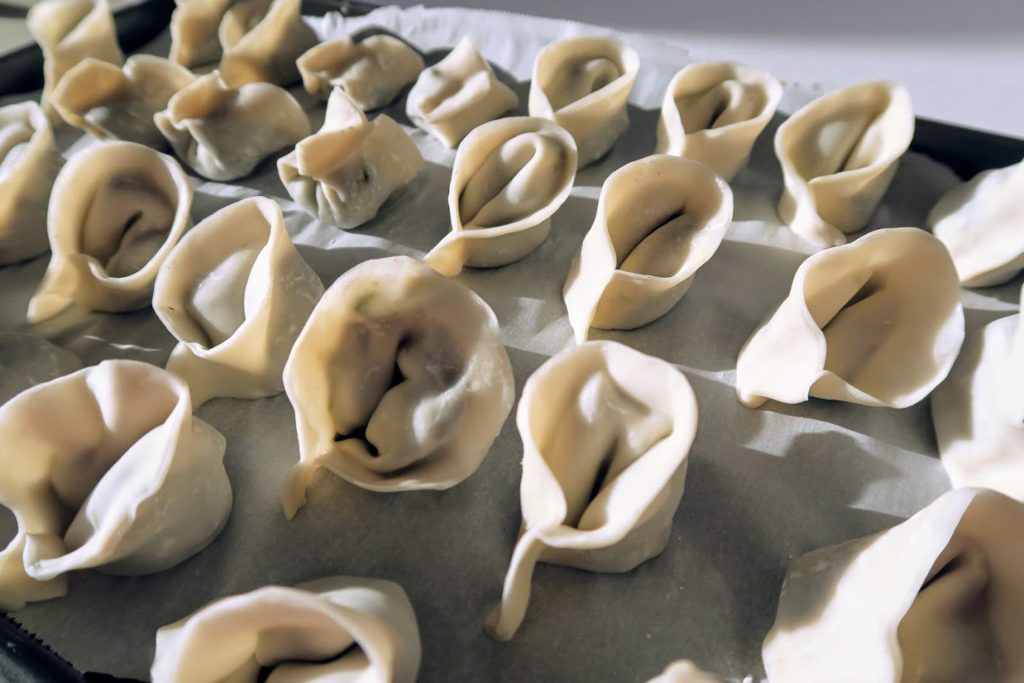 When it comes time to serve them, boil them in rapidly boiling water until they float.  I’ll leave them a couple minutes after they float for good measure.

To serve with borscht, place a few boiled dumplings into the soup bowl and top with borscht. 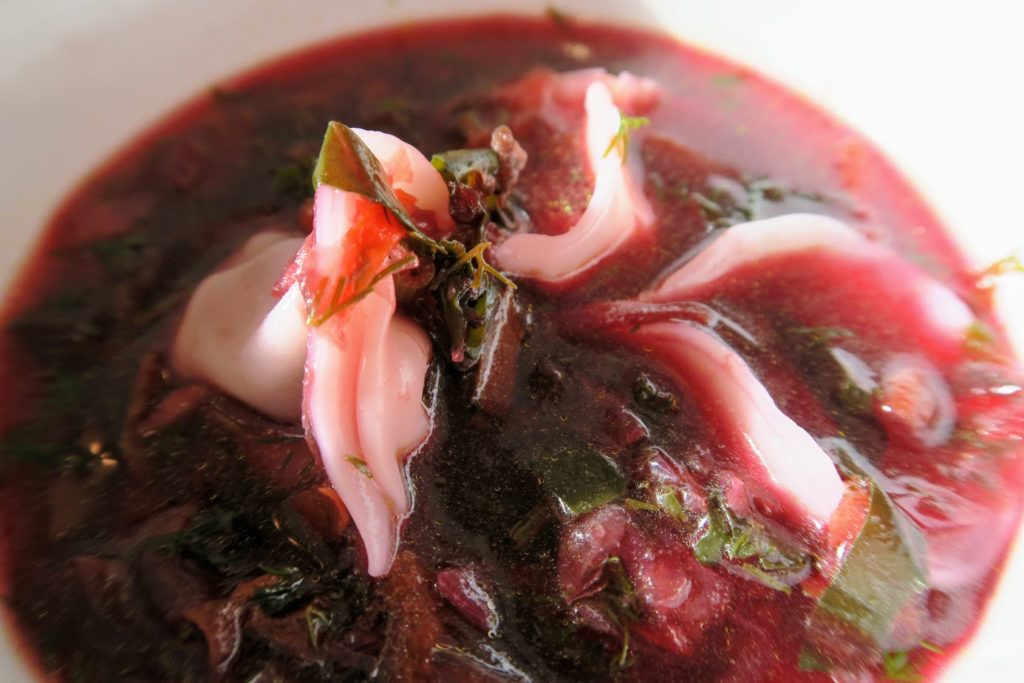 For Sviata Vecheria, I usually serve only one or two per bowl – because people have to eat eleven other things.  But, three to five of these dumplings can turn a soup into a full meal.

* You could use the Saute function on the Instant Pot.  But, when you’re cooking the mushrooms, the objective is to get rid of the moisture.  I personally think you can get this done faster with a frying pan.

One thought on “Mushroom Vushka – Dumplings for borscht”

This site uses Akismet to reduce spam. Learn how your comment data is processed.

Get updates by email!

Find out when new recipes are posted. Receive an email with updates and that's it - no spam, no nonsense, just updates. 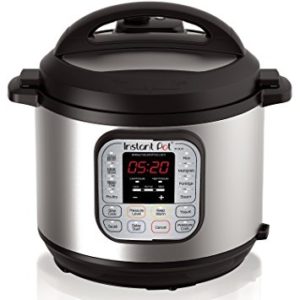